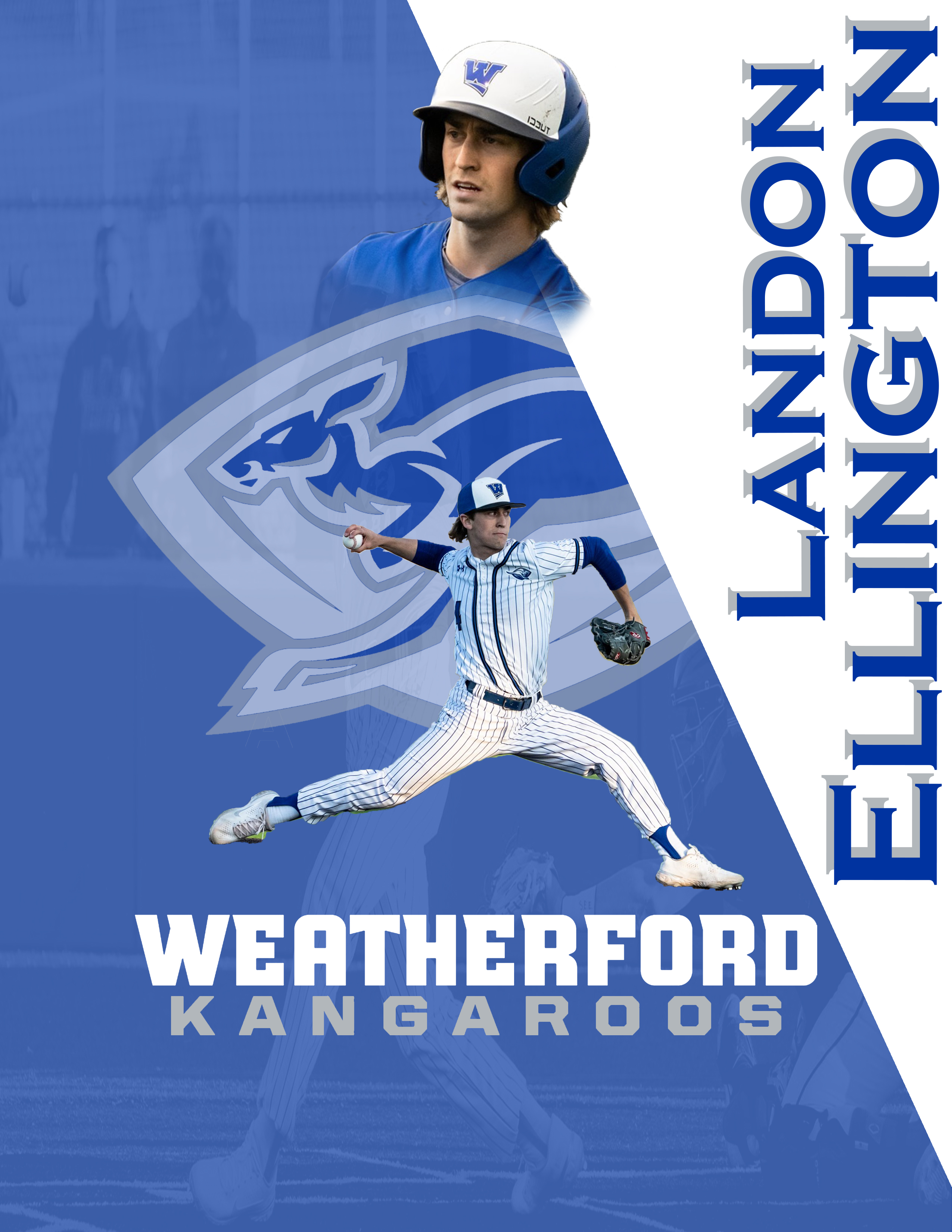 Landon Ellington is a senior baseball player at Weatherford High School.  He was a three-year starter batting .340 this season with 18 RBIs, 16 runs scored, and seven stolen bases.  Landon excelled on the mound for the Roos where he finished the season with 104 strikeouts in 64 innings and had a 1.64 ERA.   He was named district “Newcomer of the Year” as a sophomore and was a First Team All-District selection this year.  He was Academic All-District all three years as a starter and this year he was named Academic All-State.  Landon closed out his senior district campaign with back to back no-hitters vs North Crowley and Chisholm Trail to help the Roos clinch a playoff spot.  Landon will be graduating with a GPA of 3.90 and has accepted a scholarship to continue playing baseball at TCU. 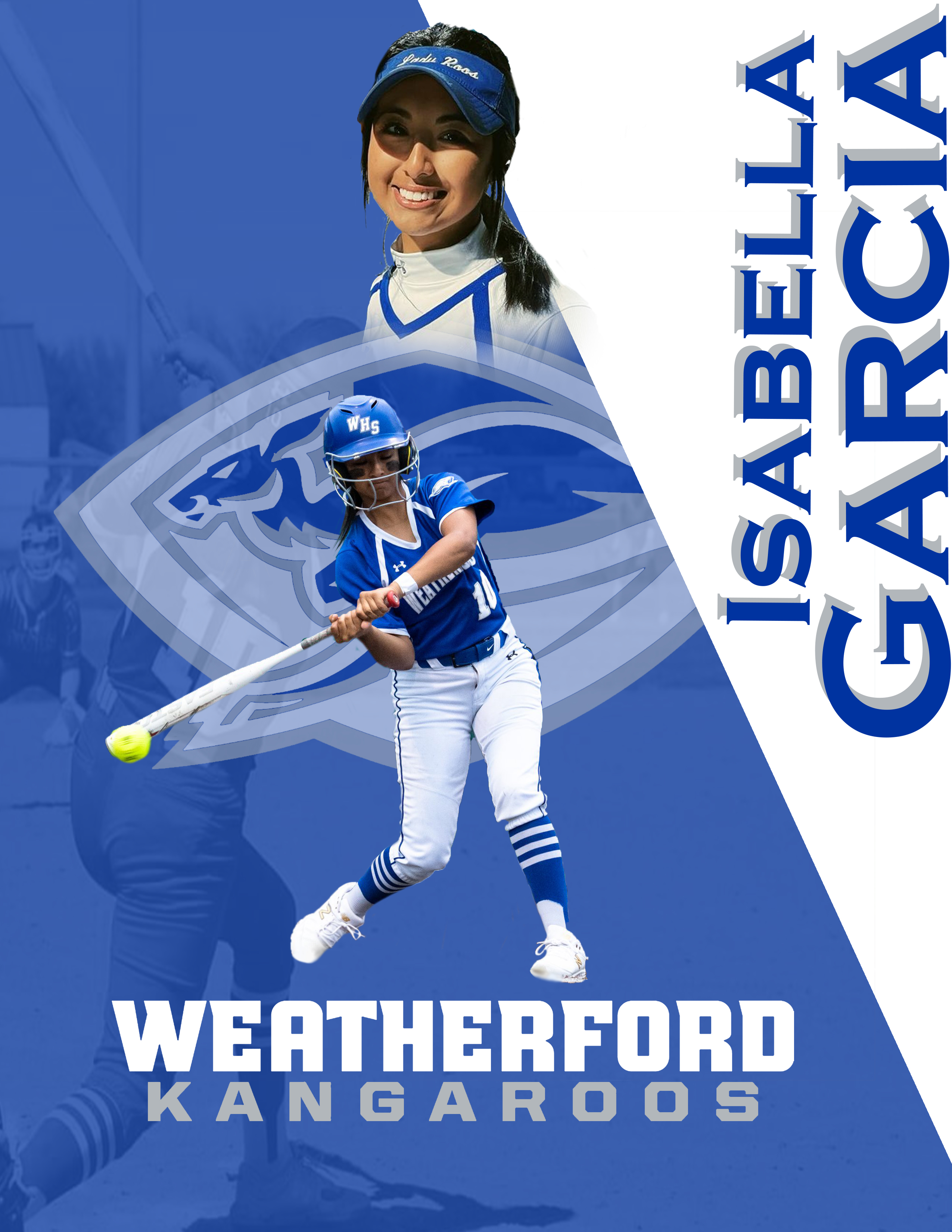 Bella Garcia is a senior softball player at Weatherford High School and was recently named to the District 3-6A 1st team all-district.  Bella worked incredibly hard to even get to play her senior season.  She tore her ACL just before school started her junior year and did not get the opportunity to play.  This year in her senior year led the team in hits (40), batting average (.465), RBI (35), and HR (6).  She is an outstanding leader on the field and off, and sets a great example for her teammates as to how a student athlete should present herself to her peers, teachers, and the general public.  She has a 3.58 GPA, Academic All-District, and is involved in the PALS Program at WHS.  She is undecided on where she will go to school but she will play softball.

Mason Woodward is a senior wrestler at Weatherford High School and finished the season second in the state with a record of 26-3.  He was the District Champion, Regional Runner Up, and the State Runner Up all in the month of April.  Mason dominated opponents all year and celebrated his 100th career pin earlier this season.  He also was named the most outstanding wrestler at the District 2-6A Meet.  Mason has a GPA of 3.89 and is ranked in the top quartile of his class.  Mason plans on attending Fort Hayes State in Kansas where he will continue his wrestling career. 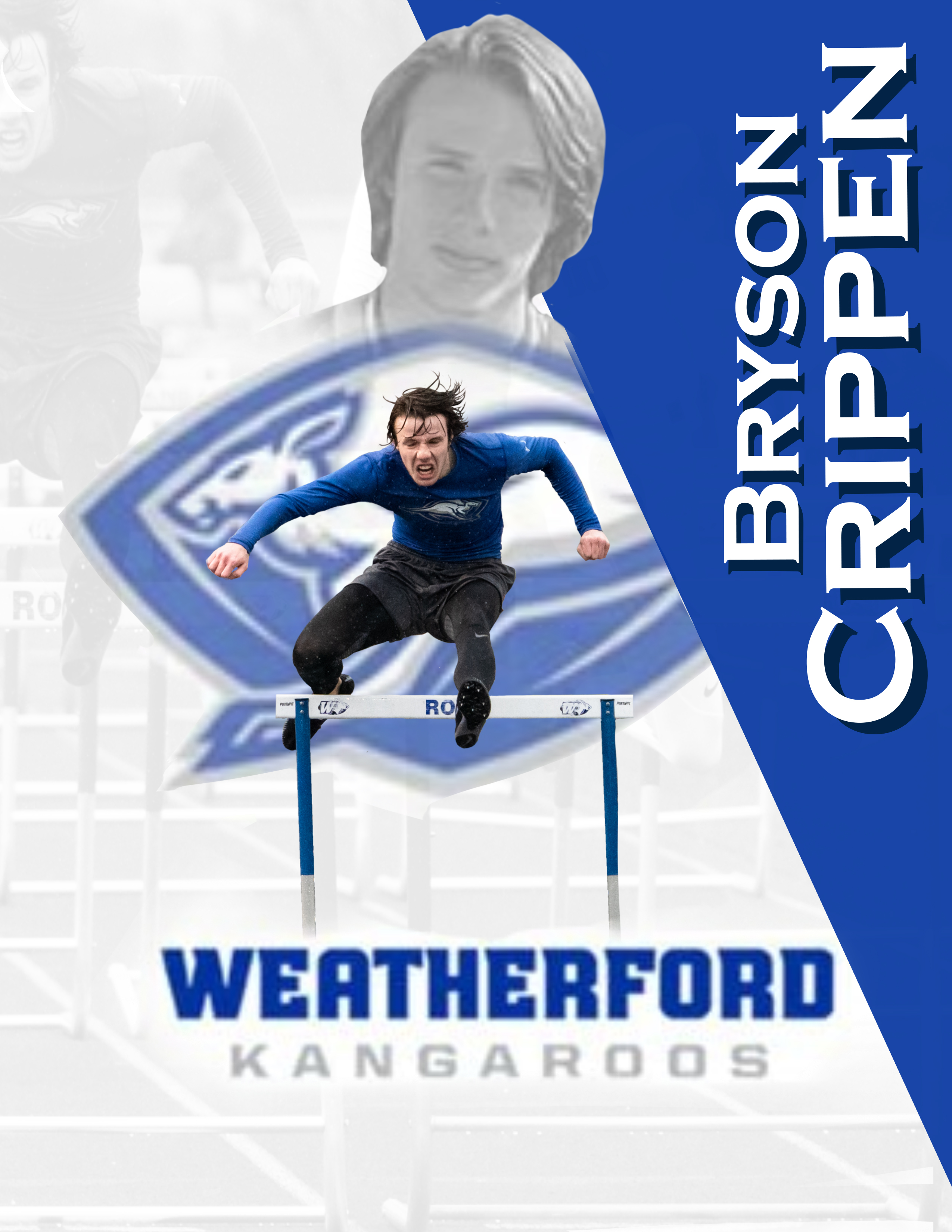 Bryson Crippen is a junior track athlete at Weatherford High School and was the District 3 6-A Champion in the 110 and 300 hurdles.  In addition to winning both of those events at the district meet he also was a part of the mile relay team that placed second and advanced to area.  This was the first time Weatherford has taken a relay to area since 2016.  Bryson won the Weatherford, Aledo, and Springtown meets in the 110 hurdles.  At area he placed second in the 300 hurdles running a personal best time of 39.20 and placed fifth in the 110 hurdles with another personal best time of 15.28.  Bryson is a junior this year and will be returning for his senior year next season.

Kaylynn Green is a senior wrestler for our Lady Roo Wrestling team and she ended the year with a 3rd place finish in the state tournament with a record of 18-3. On her way to State, Kaylynn was district champion and regional champion.  She was a two-year captain of the Lady Roo Wrestling Team and competed at the state meet all four years of high school.  Kaylynn has a GPA of 3.73 and is in the top 30% of her class.  She is undecided on what school she will be attending next fall.

Jayden is a senior powerlifter at Weatherford High School.  This month he won the 6A State Powerlifting Meet in the 275-pound division.  Jayden lifted a total of 1,710 pounds with a 720 lb squat, 415 lb Bench, and a 575 lb dead lift.  Jayden overcame an abdominal injury to place second at the regional meet earlier this month to advance to state.  Jayden has been a consistent, committed, hard-working, and respectful young man.

Madison Hines placed 1st in her weight class at the 6A State Powerlifting Meet in Corpus Christi. Her totals were squat 365 lb, bench 210 lb, and deadlift 325 lb for a total weight of 900 pounds.

She placed 1st in every league powerlifting meet she went to this season and also won best overall lifter at the Weatherford Girls Last Chance Qualifier Powerlifting Meet.

She has been a part of the powerlifting team since her sophomore year.  Last year in her junior year she was a state qualifier but wasn’t able to compete due to it being canceled because of COVID.

Madison is ranked is 26th in her class and is a part of FFA, CDE Team, and Powerlifting.  She plans on attending Texas A&M and majoring in Biology then going to Vet School for DVM.

RILEY IS A SENIOR FOOTBALL PLAYER AND POWERLIFTER AT WEATHERFORD HIGH SCHOOL.  HE IS CURRENTLY THE #1 RANKED LIFTER IN THE 242-POUND DIVISION AND LEADS THE PACK BY OVER 150 POUNDS.  HE IS THE #5 LIFTER IN THE STATE CURRENTLY IN HIS WEIGHT CLASS.  RILEY HAS WON EVERY MEET HE HAS COMPETED IN THIS SEASON AND WAS NAMED THE MOST OUTSTANDING LIFTER AT THE GRAHAM INVITATIONAL MEET EARLIER THIS MONTH.  IN FOOTBALL, HE WAS NAMED TO THE DISTRICT 3-6A 1ST TEAM ALL-DISTRICT AND ALL-PARKER COUNTY FOOTBALL TEAMS.  RILEY IS COMMITTED TO UT PERMIAN BASIN UNIVERSITY TO PLAY FOOTBALL NEXT FALL. 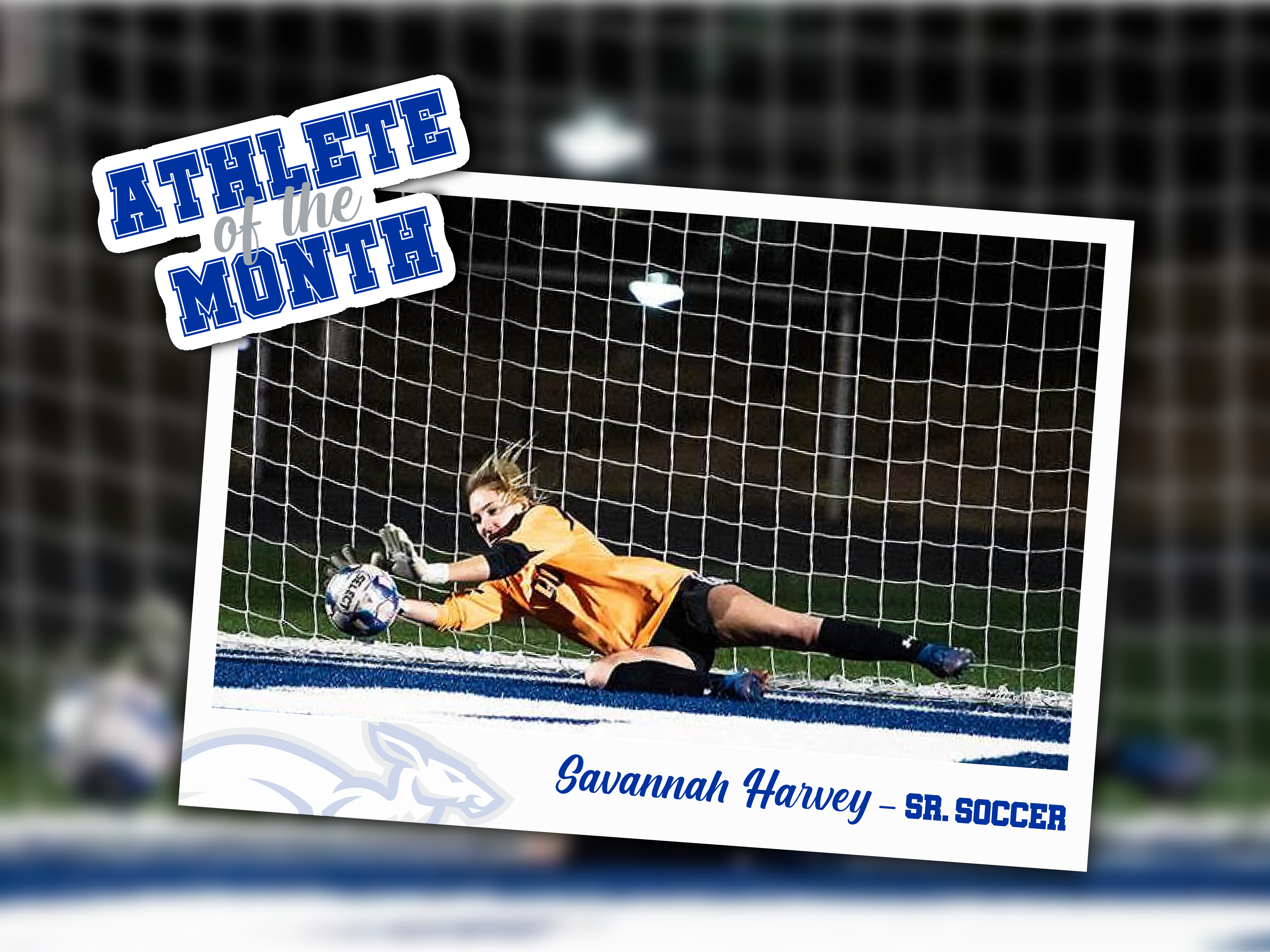 SAVANNAH IS A SENIOR SOCCER PLAYER FOR THE LADY ROOS.  SAVANNAH IS THE GOALIE FOR THE TEAM AND IS A TEAM CAPTAIN.  SAVANNAH HAS 118 TOTAL SAVES GIVING HER 14 PER GAME THIS SEASON.  SHE HAS A WHOPPING SAVE PERCENTAGE OF 88%.  SHE IS LEADING THE TEAM TOWARDS PLAYOFF CONTENTION BY PITCHING SHUTOUTS IN THREE GAME DURING THE MONTH AND ONLY GIVING UP ONE GOAL IN OTHER GAMES THIS MONTH.  SAVANNAH IS RANKED 76TH IN HER CLASS PUTTING HER IN THE TOP 15% WITH A GPA OF 3.79.  SHE ALSO IS A GOLD MEDAL MADRIGAL ADVANCING TO STATE WITH THE UIL SOLO AND ENSEMBLE CONTEST WITH WHS CHOIR.  SAVANNAH IS COMMITTED TO RODGERS STATE UNIVERSITY IN OKLAHOMA TO PLAY SOCCER NEXT FALL.

KURT IS A SENIOR FOOTBALL PLAYER AT WEATHERFORD HIGH SCHOOL AND IS A THREE-YEAR STARTER FOR THE KANGAROOS.  HE WAS AN INTEGRAL PART OF THE PLAYOFF BOUND FOOTBALL TEAM THIS FALL PLAYING LEFT TACKLE AND ANCHORING THE OFFENSIVE LINE.  KURT WAS THE HIGHEST GRADED OFFENSIVE LINEMAN AND FINISHED THE YEAR WITH A GRADE OF 97%.  HE WAS THE ONLY LINEMAN ABOVE 95% AND ONE OF TWO ABOVE 90%.  HE WAS NAMED TO THE DISTRICT 3-6A 1ST TEAM ALL-DISTRICT AND ALL-PARKER COUNTY FOOTBALL TEAMS.  HE ALSO LED THE ROOS WITH 15 PANCAKE BLOCKS AND AMAZINGLY DID NOT GIVE UP A SACK THE ENTIRE SEASON.  KURT HAD HIS BEST GAMES AT THE END OF THE SEASON AND DOMINATED ANOTHER DIVISION ONE COMMIT IN THE PLAYOFF GAME.  KURT IS COMMITTED TO TARLETON STATE UNIVERSITY TO PLAY FOOTBALL NEXT FALL. 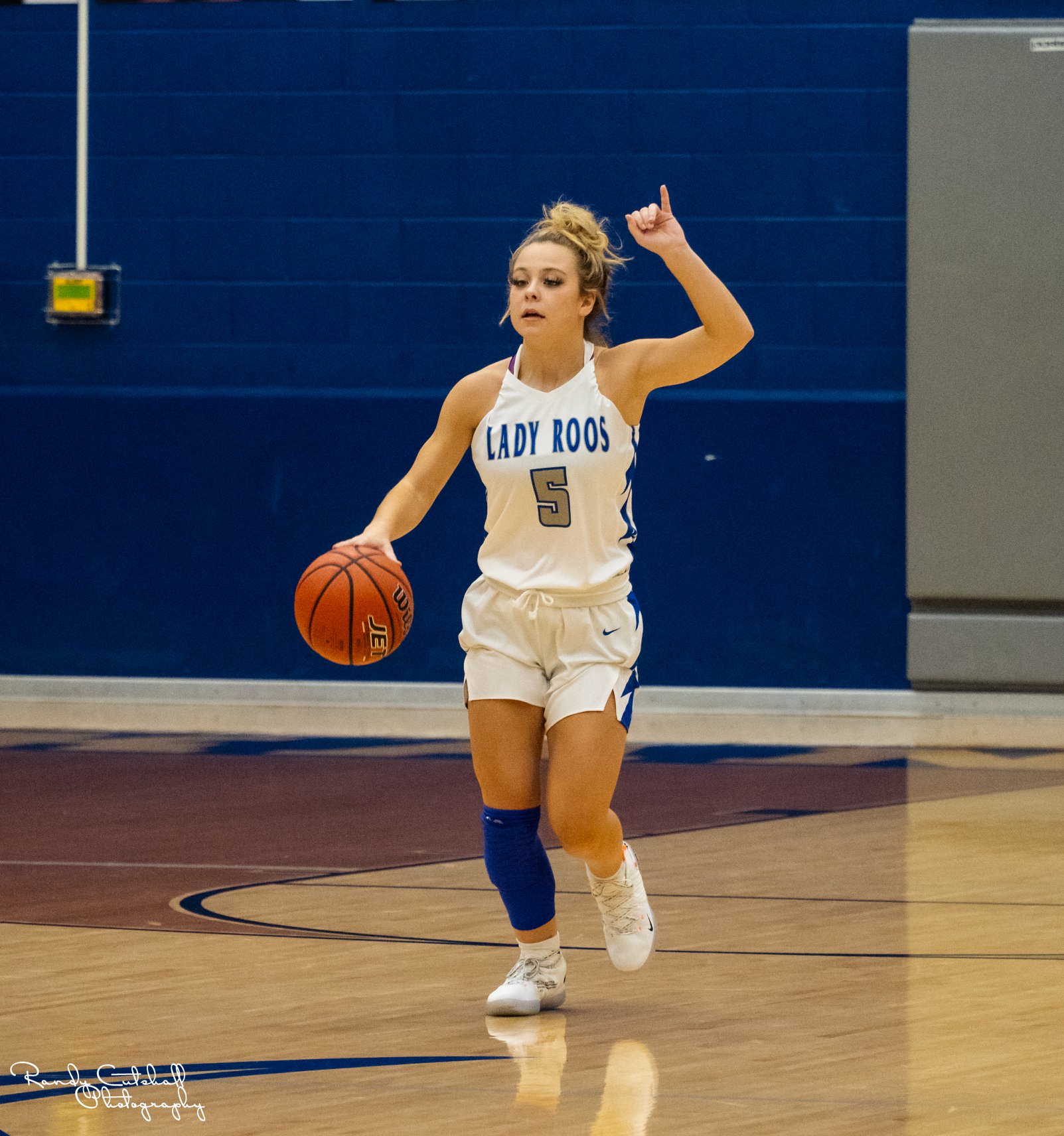 HANNAH IS A SENIOR BASKETBALL PLAYER FOR THE LADY ROOS.  HANNAH CURRENTLY LEADS THE TEAM IN POINTS PER GAME, STEALS, AND DEFLECTIONS.  IN HER THIRD YEAR ON VARSITY SHE IS SECOND ON THE TEAM IN REBOUNDS, LEADS THE TEAM IN MINUTES PLAYED, AND IS SEEN AS THE DEFENSIVE LEADER FOR THE TEAM.  SHE IS A RETURNING ALL-DISTRICT PERFORMER FROM 2019-2020 AND IS A CAPTAIN ON THIS YEAR’S SQUAD.  HANNAH IS A SENIOR WHO IS AN A/B HONOR ROLL STUDENT AND IS RANKED IN THE TOP 20% OF THE SENIOR CLASS.  HANNAH PLANS TO PLAY BASKETBALL IN COLLEGE BUT IS UNDECIDED YET ON WHERE SHE WILL ATTEND. 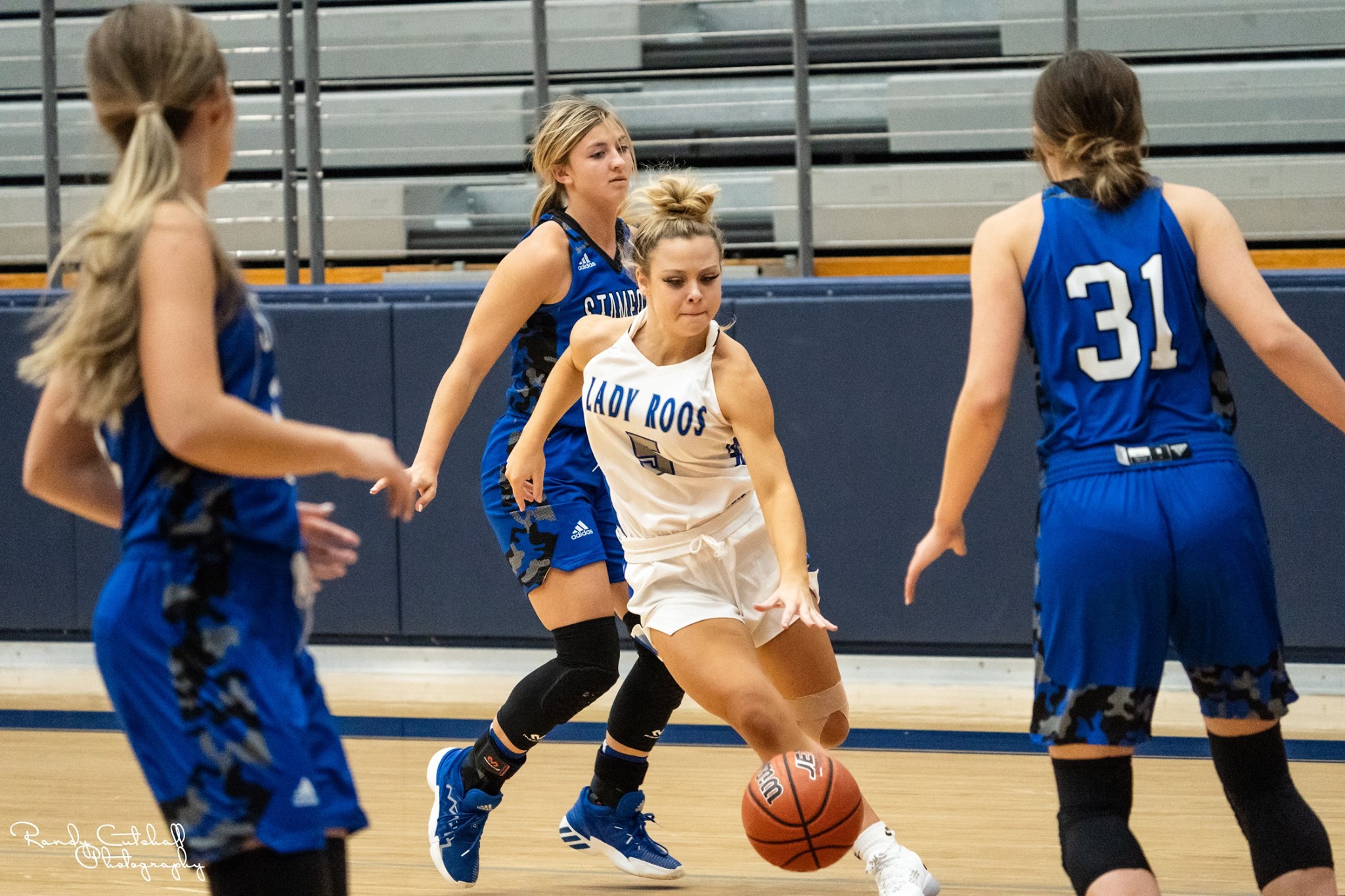 BRADEN IS A SENIOR AT WEATHERFORD HIGH SCHOOL AND PLAYS TENNIS AND BASKETBALL.  HE WAS AN INTEGRAL PART OF THE DISTRICT CHAMPION TENNIS TEAM THIS FALL AND COMPILED A RECORD OF 9-1 IN SINGLES AND 9-2 IN DOUBLES.  BRADEN IS NOW THE LEADING SCORER AND REBOUNDER ON THE WHS BASKETBALL TEAM AVERAGING 15 POINTS, FIVE REBOUNDS, AND TWO STEALS PER GAME.  BRADEN LEADS THE TEAM IN ALL THREE OF THESE CATEGORIES.  HE HAS LED THE ROOS TO A 2-2 START TO THE 2020-2021 SEASON.  BRADEN HAS A 4.0 GPA AND IS IN THE TOP 30 OF THE 2020 SENIOR CLASS.  BRADEN PLANS TO PLAY BASKETBALL IN COLLEGE BUT IS UNDECIDED YET ON WHERE HE WILL ATTEND. 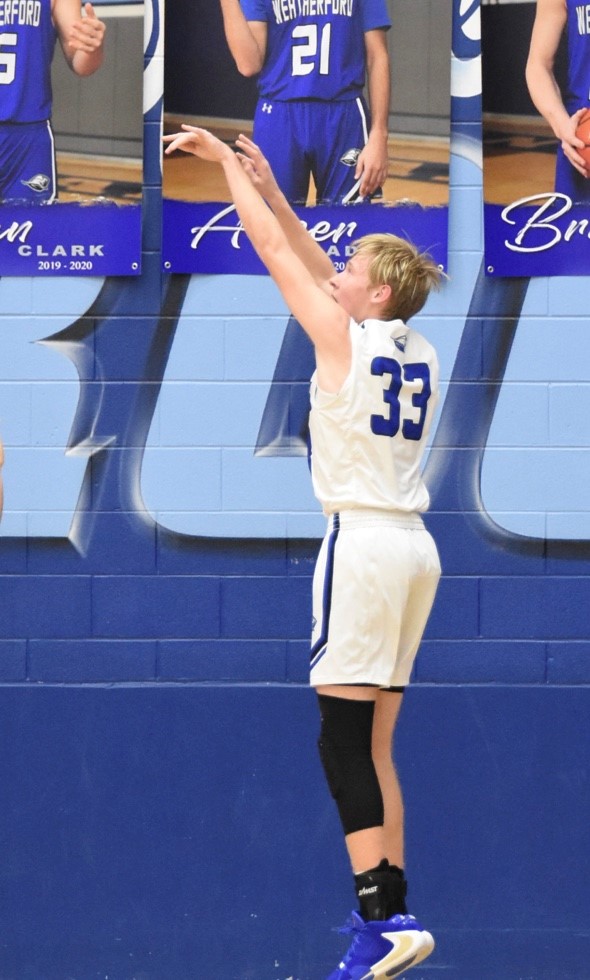 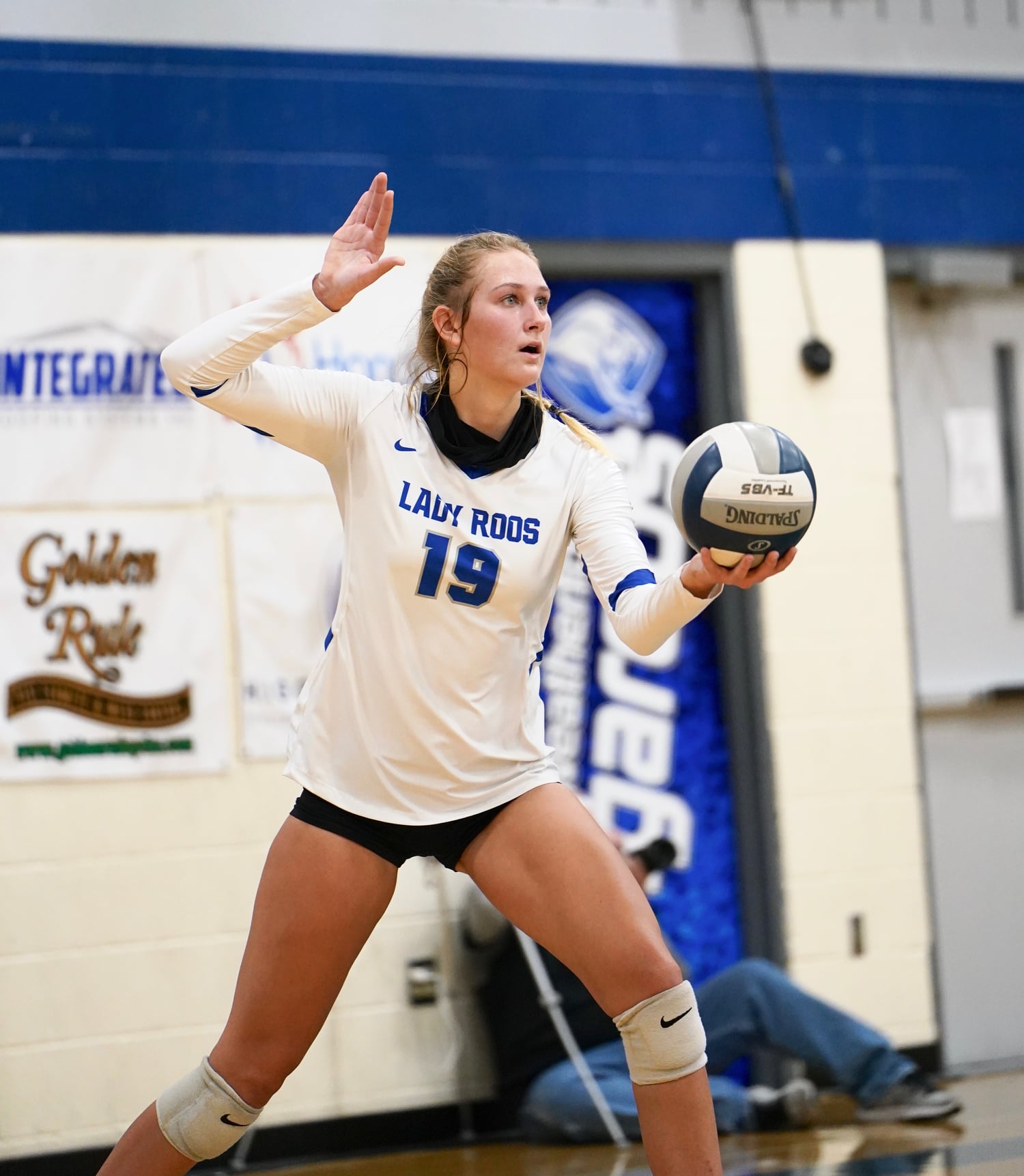 KATE IS A SOPHOMORE VOLLEYBALL PLAYER THAT WAS JUST NAMED THE OFFENSIVE PLAYER OF THE YEAR IN DISTRICT 3-6A.  KATE LED THE LADY ROOS TO THEIR FIRST PLAYOFF WIN IN THREE YEARS AND A SPOT IN THE REGIONAL QUARTERFINAL GAME.  IN THE AREA ROUND OF THE PLAYOFFS VS MIDLAND KATE SET A SCHOOL RECORD WITH 26 KILLS.  ON THE SEASON KATE HAD 198 KILLS AND HAD A HIT PERCENTAGE OF .345.  SHE ALSO LED THE TEAM IN SOLO BLOCKS AND TOTAL BLOCKS WITH 24 AND 75 RESPECTIVELY AND AVERAGED 3.1 BLOCKS PER MATCH.  ATYPICAL FOR A MIDDLE BLOCKER KATE ADDED 96 DIGS WHICH WAS GOOD FOR 4.0 PER MATCH.  KATE REALLY TOOK OVER IN THE PLAYOFFS HAVING KILLS OF 16, 26, AND 13 AND LEADING THE TEAM IN EACH GAME LEADING THE TEAM IN KILLS AND BLOCKS. ALSO DURING THE LADY ROOS PLAYOFF PUSH SHE AVERAGED 18.3 KILLS A GAME (6.2 IN THE REGULAR SEASON), 6.3 BLOCKS PER GAME, AND 13.3 DIGS PER GAME.  KATE IS A JUST A SOPHOMORE BUT PLANS ON PLAYING VOLLEYBALL AT THE COLLEGIATE LEVEL. 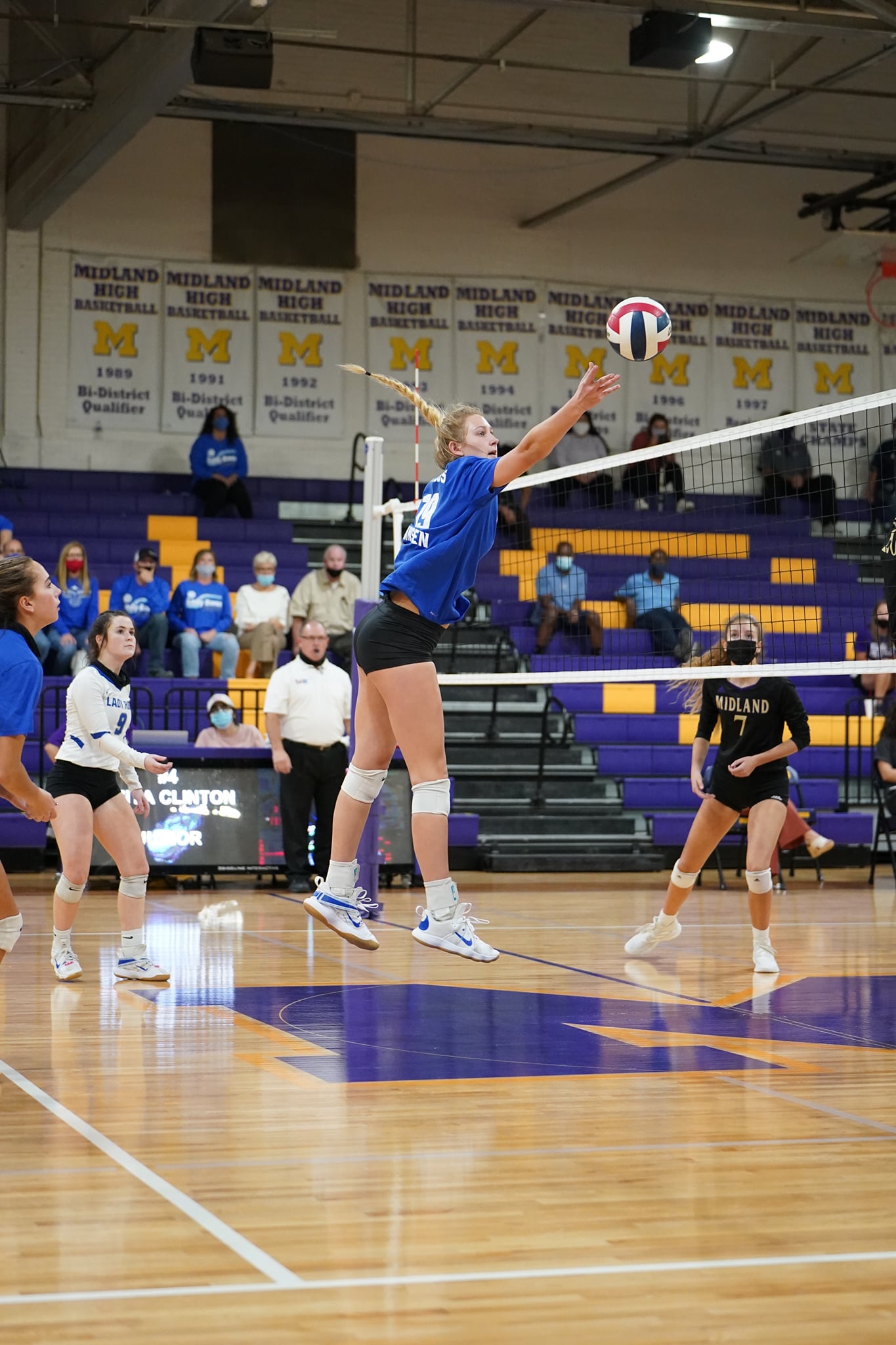 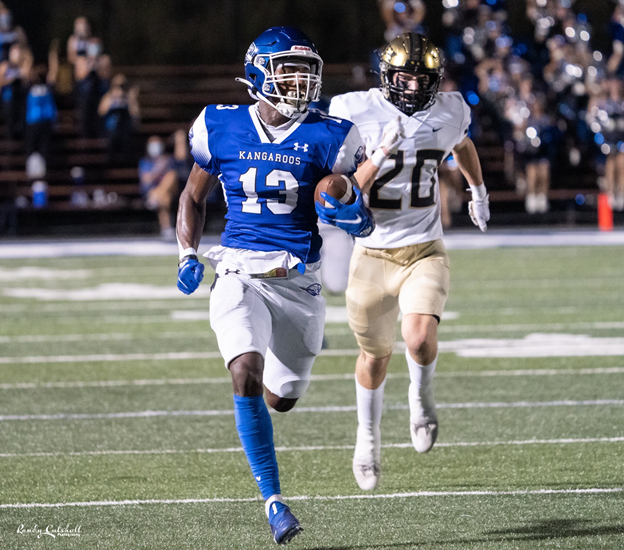 Cisco Caston is a senior at Weatherford High School and he plays football and runs track.  He is a captain for the football team and leads the team in touchdowns, caused fumbles, and return yardage.  He is also third on the team in tackles and second in interceptions.  Cisco has scored touchdowns this season as a rusher, receiver, passer, and kick returner.  He starts on offense and defense and is a key player on most of the special teams.  He played a huge role in the two Roo victories this month with the defense giving up a combined total of 14 points in those wins.  Cisco's mother is Rotavia Washington and he is committed to Baylor University to continue his football-playing career. 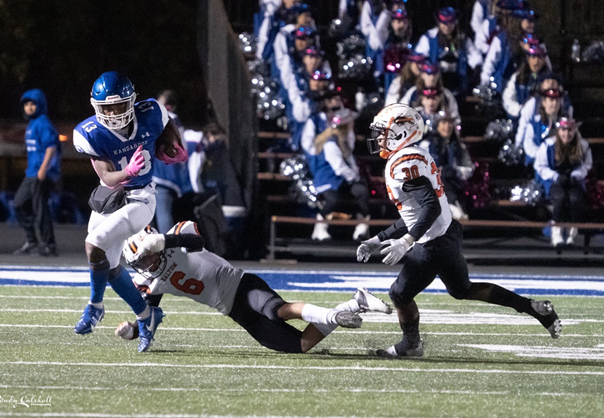 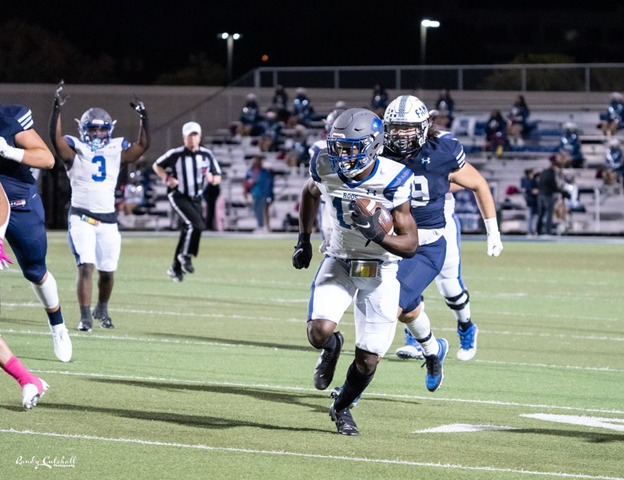 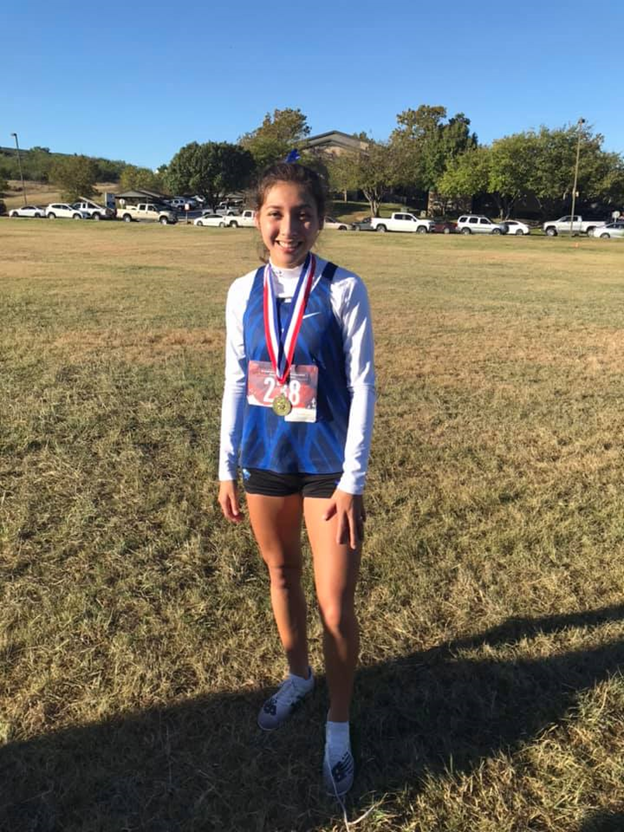 Ella Pando is a junior cross country and track runner for Weatherford High School.  Ella is the 2020 district champion and led her team to a second-place finish in the district meet, advancing the team to the Regional Meet in Lubbock.  Ella has won five of her six meets this year and was a state qualifier in 2019.  She ran the course record for girls at the Weatherford Invitational earlier this year with a time of 18:25.  She is an AB honor roll student and attends Greenwood Baptist Church.  Her parents are Monica and Steve Pando. 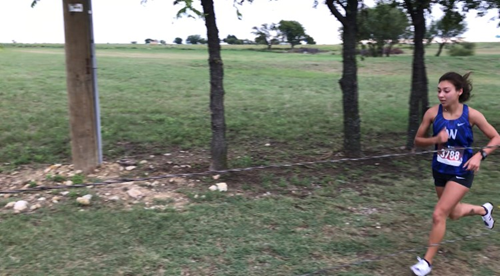 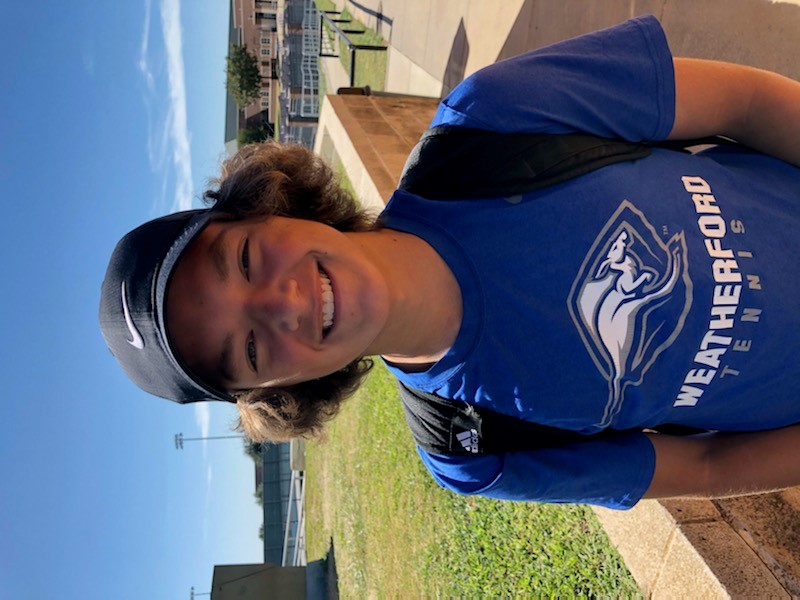 Austin is a Junior at WHS and is entering his 3rd year as WHS #1 ranked boy.  His overall record this fall is 10-2, going 4-0 in district singles (5-1 overall) and 3-1 in district doubles (5-1 overall).  Austin has lead the team from only winning one district match in the previous three seasons to being the #1 seed in the district at the end of the month.  With four weeks left in the season Weatherford is on pace to go to the playoffs in tennis for the first time in over a decade.  Austin is also ranked in the top five in his class academically.

Abbie is a Senior at WHS and is the returning District MVP for Volleyball (Junior Season).  In her senior season she is leading the team to a 7-2 record and 1-0 in district during the month of September.  Abbie is leading the team in sets played, kills, kills per set, kill percentage, and hit percentage.  She also leads the team in serve percentage, second in total blocks, and is third on the team in points scored off of serves.  Abbie was named as a TGCA All-Star for the summer of 2020.  Abbie is committed to play volleyball at Holy Cross.