Rylie is a senior cheer captain for the WHS Competition Cheer Team.  The Cheer Team placed 5th at state and won the ‘Best Crowd Leading’ category.  The Roos also placed 2nd at the NCA National Competition.  Rylie is on her second year on the team since coming here from Iowa Park.  She is ranked 18th in her class of 540 students and has a 4.0 GPA.  She is a part of various organizations at Weatherford including:  National Honor Society, National Technical Honors Society, Student Council, DECA, PALS, and is the softball manager.  She was also selected as the August Optimist Student of the Month.  Rylie plans on attending Oklahoma State University and majoring in finance this fall.

Anna is a senior cheer captain for the WHS Competition Cheer Team.  The Cheer Team placed 5th at state and won the ‘Best Crowd Leading’ category.  The Roos also placed 2nd at the NCA National Competition. Anna is in her third year on the Varsity Competition Cheer Team.  She is ranked 15th out of 540 in her class and has a 4.0 GPA.  Anna is currently the Class of 2023 Vice president, NHS Secretary, SNHS Public Relations Officer, NTHS President of Service, Student Council, and a member of DECA.  She was also in the WHS production of Wizard of Oz this year.  Anna plans to attend Texas A&M, University of Texas, or TCU this fall and major in business.

Rileigh is a senior cheer captain for the WHS Competition Cheer Team.  The Cheer Team placed 5th at state and won the ‘Best Crowd Leading’ category.  The Roos also placed 2nd at the NCA National Competition.  Rileigh is in her third year on varsity and the second year of being a captain.  She is ranked 16th out of 540 in her class and has a 4.0 GPA.  Rileigh is a part of various organizations at Weatherford including:  Athletic Training, PALS, Champs, National Honor Society, Student Council, and National Society of Leadership and Success.  She plans on cheering in college and majoring in Pre-Medicine and is undecided on where she will attend. 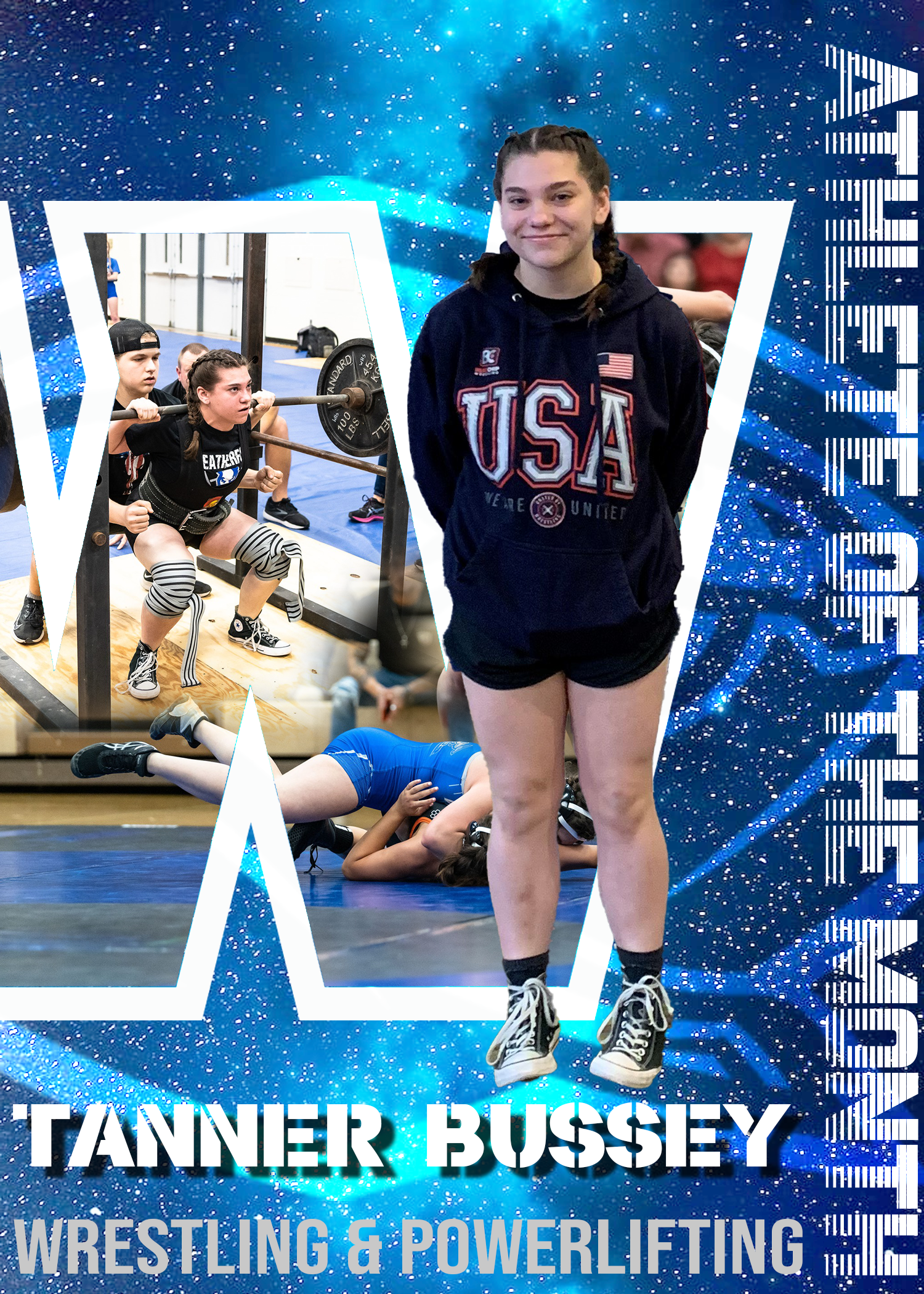 Tanner Bussey is a junior and participates on the Wrestling and Powerlifting teams.  Tanner is a team captain for the wrestling team.  She placed second in the South Grand Prairie meet earlier this season and was in the top six at the Martin meet.   In powerlifting Tanner won the first meet of the year in Lake Worth in dominating fashion.  Last year she placed third at the regional meet and hit her automatic state qualifying total before placing 11th at the state meet.  Tanner currently owns school records in the squat (305), bench press (180), dead lift (270), and total weight (740) in her weight class.  She has a 4.0 GPA and is ranked 39th in her class. 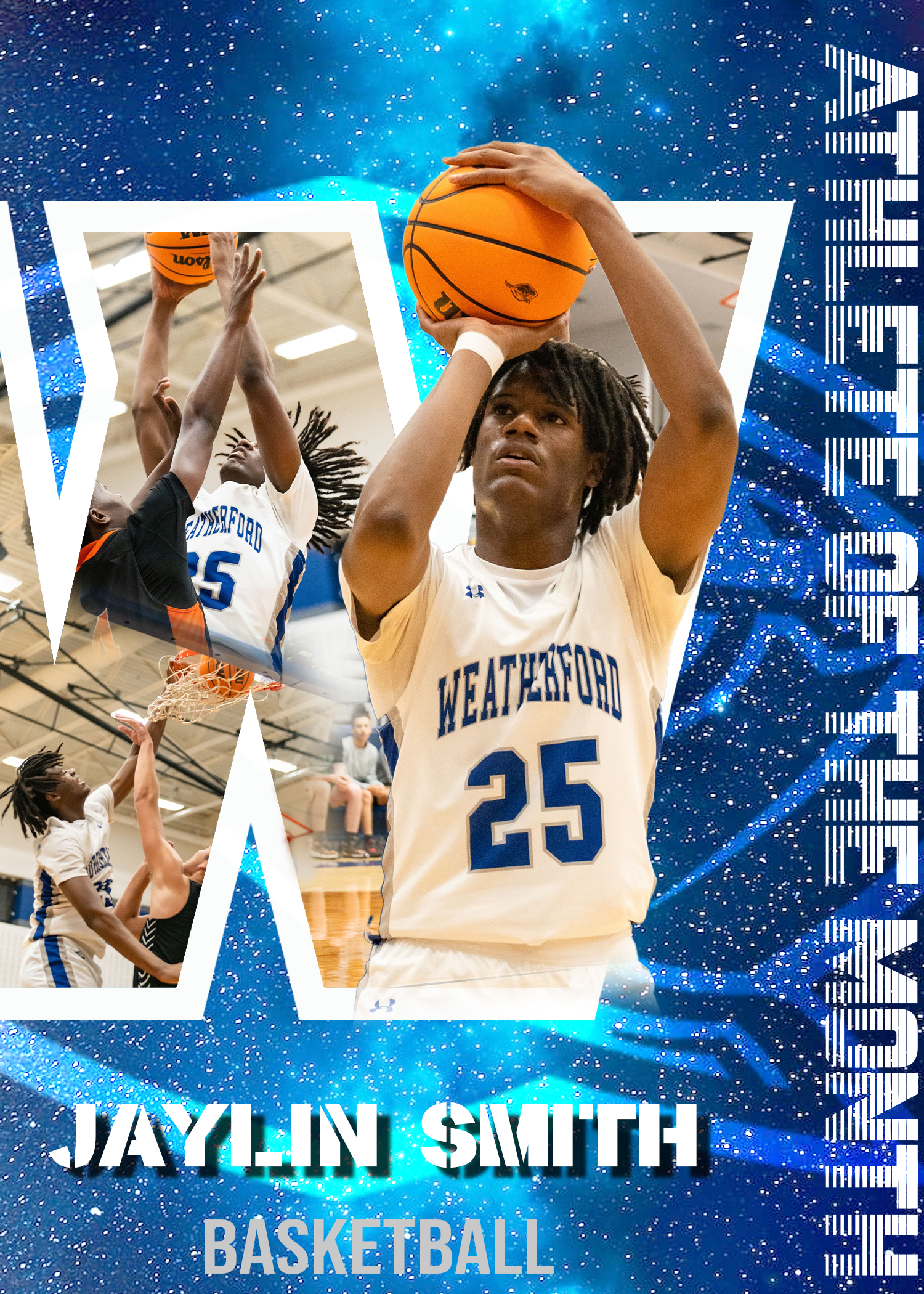 Jaylin Smith is a senior and second year letterman on the Roo Basketball team.  Jaylin is a post player who leads the Roos in rebounds and blocked shots and is second on the team in scoring. He is currently averaging 14 points, 11 rebounds, and 3 blocks per game for the Roos.  Jaylin is a team captain for the Roos and has grown to be leader both on and off the court.  He has plans to play basketball at the next level after graduation but is undecided yet on where he will be attending.

Veronica Cruz is a senior captain on the Lady Roo volleyball team.  She is a three-year letter winner and a three-time academic all-district athlete.  This year she was name the District 3-6A Defensive MVP.  She is ranked 28th in her class of 558 students and has a 3.8 GPA.  In addition to being on the volleyball team, she is also a part of NHS.  She plans on attending Weather College and entering their Cardiovascular Sonography Program. 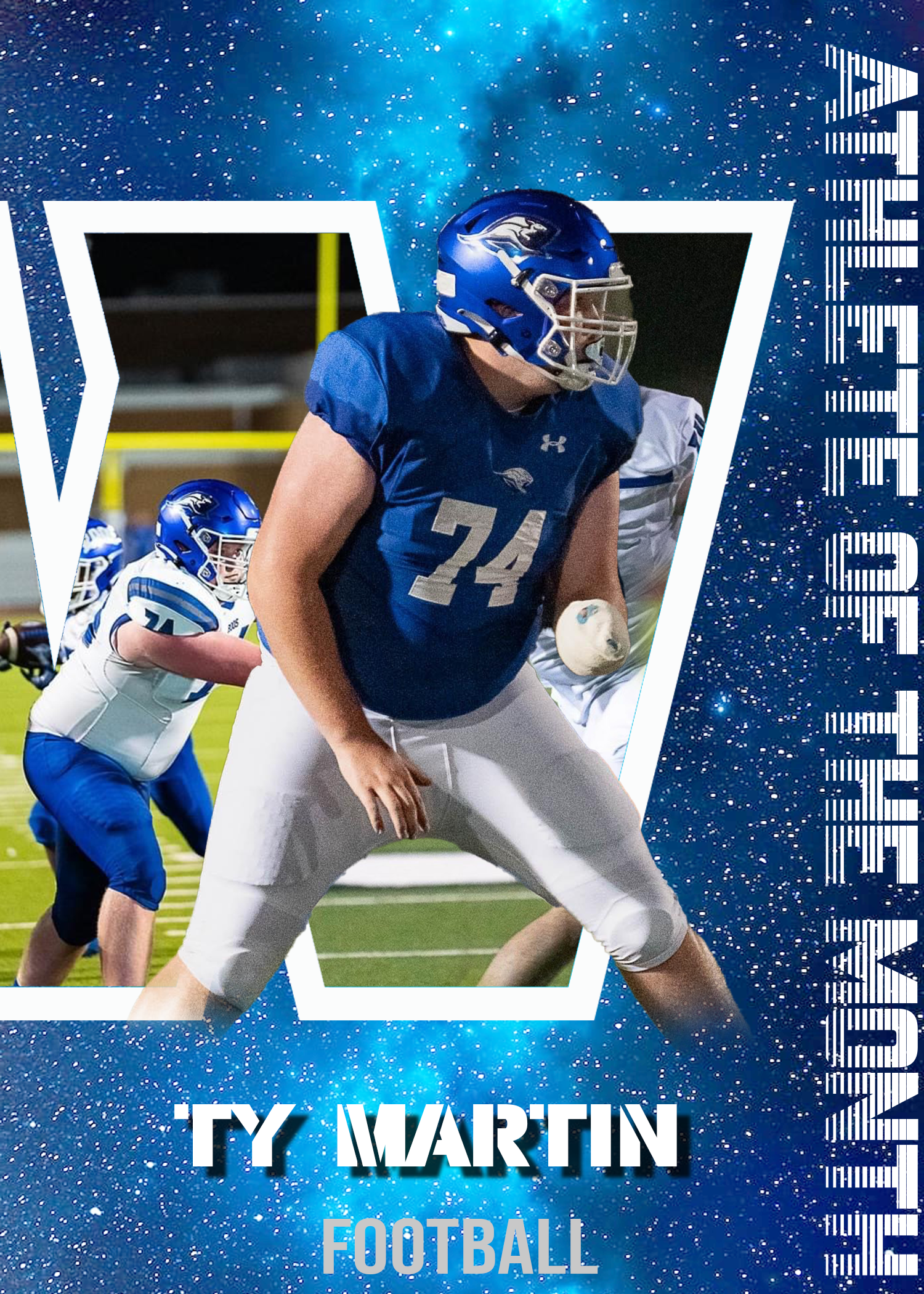 Ty Martin is a senior football player for the Weatherford Kangaroos.  Ty has been an all-district performer for the last two years playing right tackle and anchoring the offensive line.  Ty finished the season with 14 pancake blocks and helped pave the way for the Roo rushing attack that gained over 2400 yards on the ground this season.  The Roo offense also averaged 32 points a game and had over 4200 yards in ten games.  He is  a member of the PALS Program and has a 3.4 GPA.  Ty is undecided on where he will attend college but plans to play football while pursuing a degree in physical therapy. 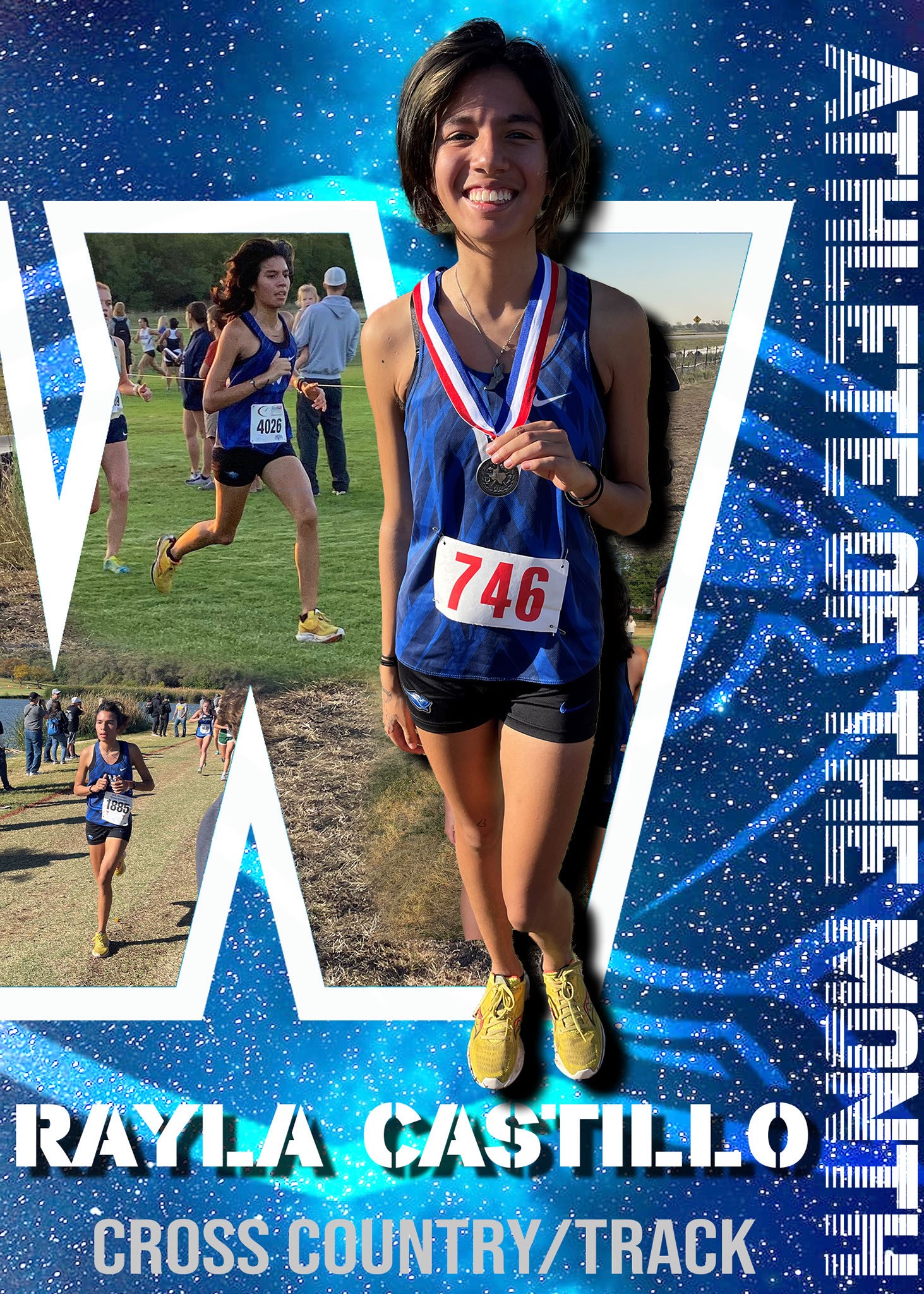 Rayla Castillo has anchored the Lady Roo Cross Country team all season.  She placed second at the District 3-6A meet earlier this month and help lead the team to a third-place finish overall.  With this finish the Lady Roos advanced to the regional meet for the third year in a row.  Rayla then placed 22nd overall at the regional meet and is the first alternate to the state meet. She has been on varsity since her freshmen year in cross country and track.  Rayla has a 3.7 GPA and wants to run cross country in college while studying Astronomy or Fine Arts. 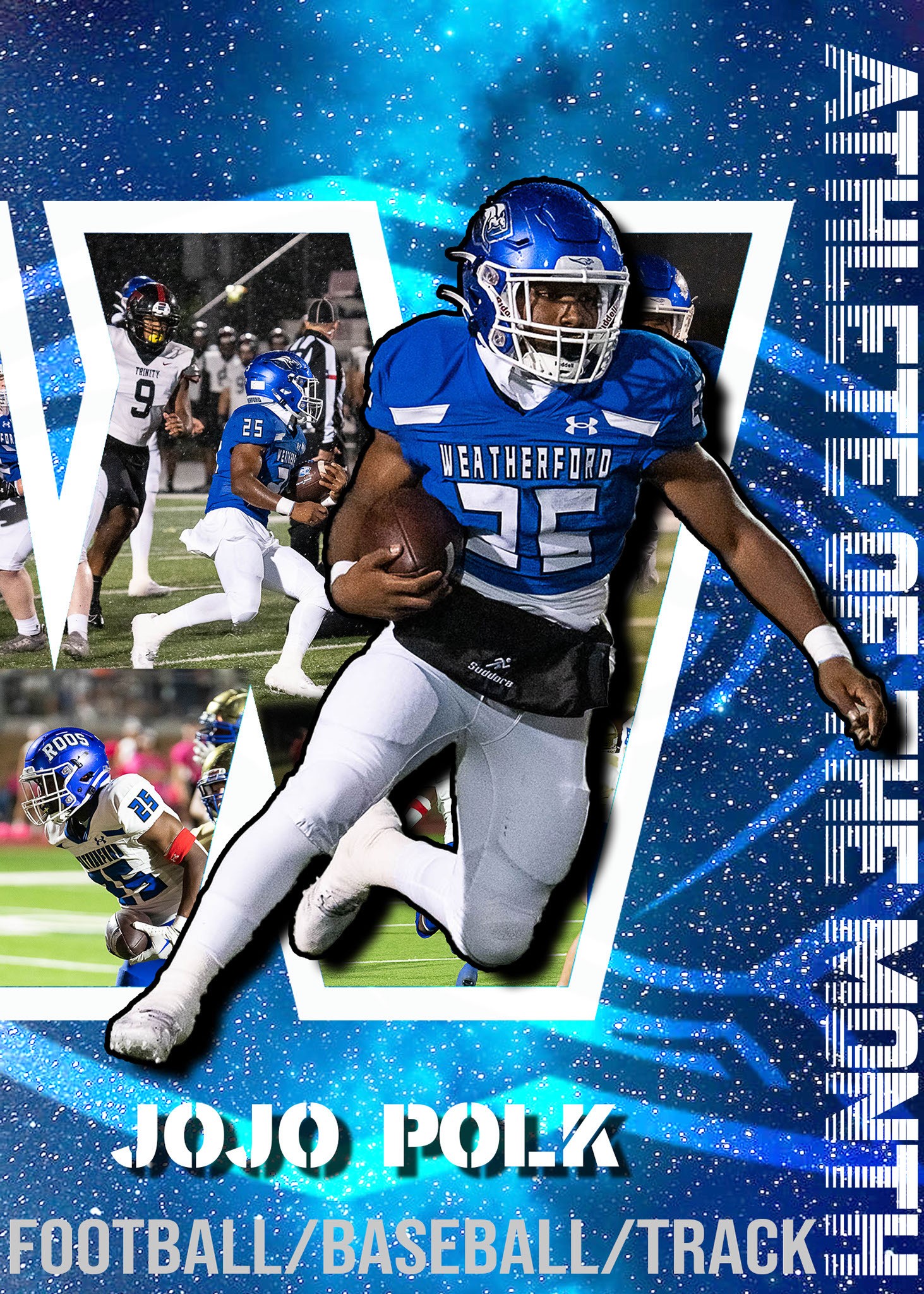 Junior Jojo Polk is the running back for the Roo Football team.  He leads the team in rushing and went over the 1,000 yard mark this season during the Boswell game.  Jojo also ran for over 250 yards and scored the game winning touchdown in overtime vs LD Bell earlier this month.  Jojo has been the model of consistency by running for over 100 yards in every game but one.  During track season he competed on the 4x100 and 4x200 meter relays.  Jojo is a two-year letter winner and plans to play football in college. 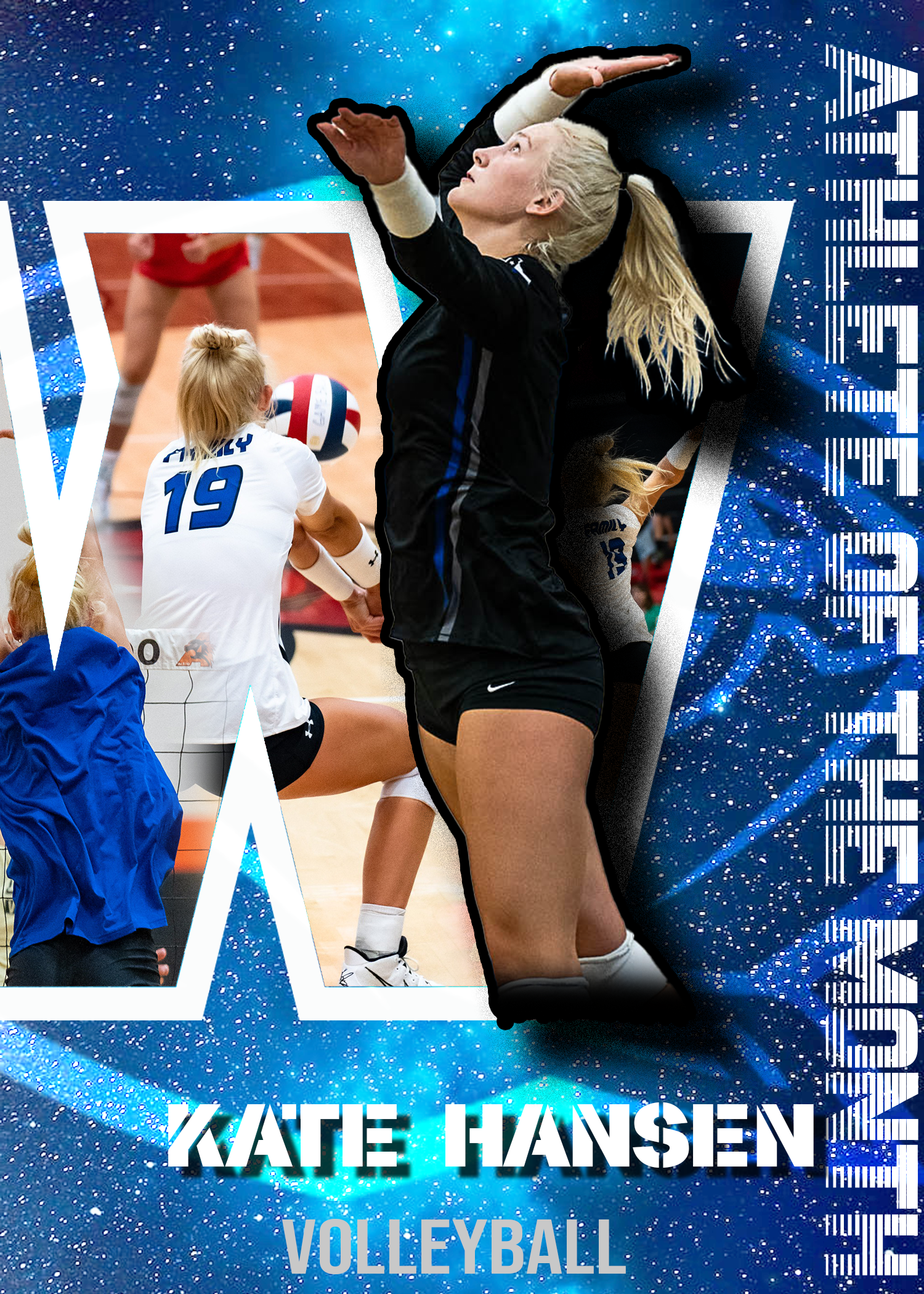 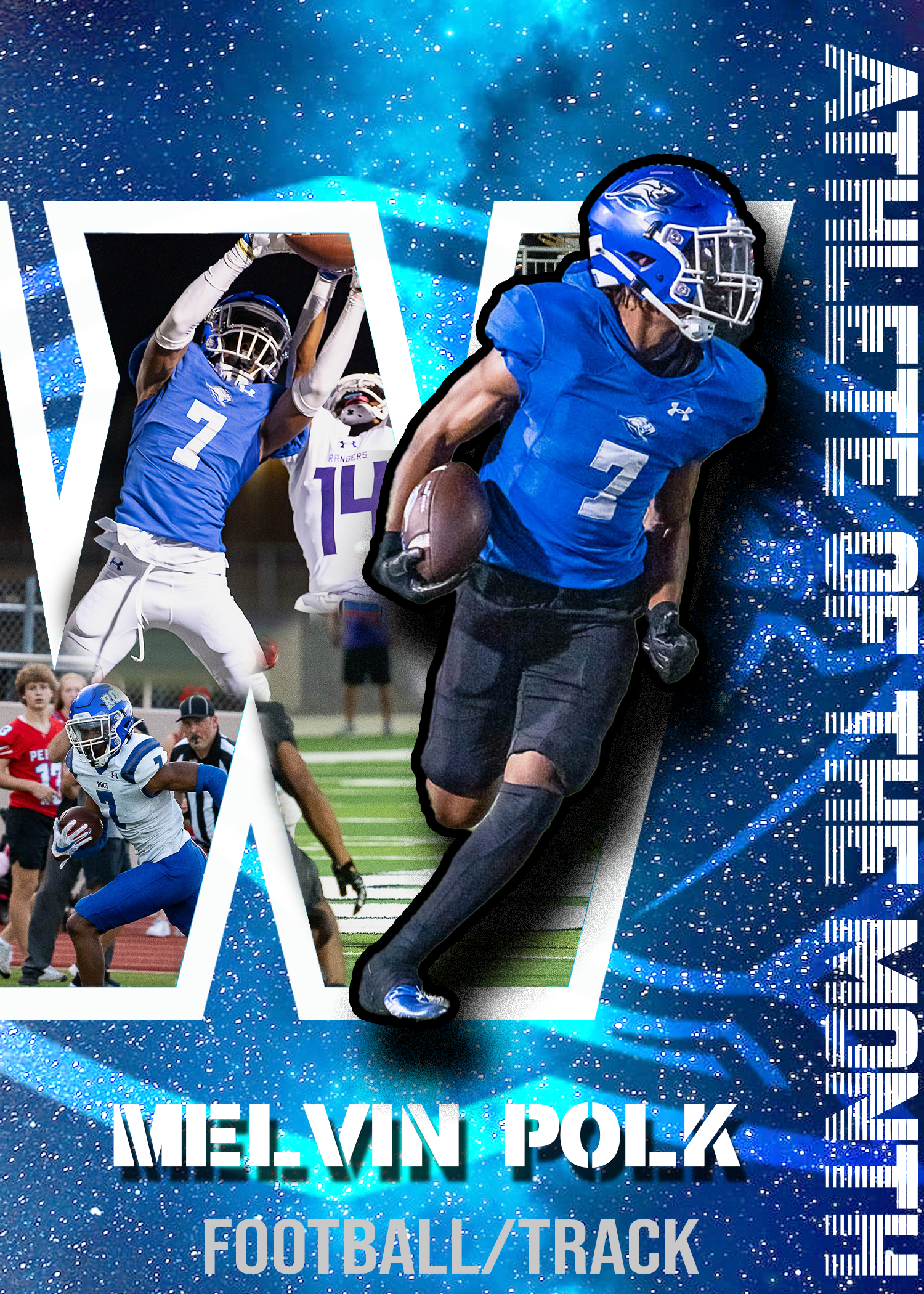 Senior Melvin Polk is a member of the Roo Football and Track teams.  As a wide receiver and defensive back he leads the offense in receiving yards, receptions, and defensively leads the team in interceptions.  Melvin currently has 27 catches on the season for 287 yards to go along with five receiving touchdowns.  He has also rushed for 175 yards on 13 carries and two touchdowns. During track season he competed on the 4x100, 4x200, and 4x400 meter relays.  Melvin has a 3.7 GPA and plans to play football in college.  Currently he has offers from Liberty, Florida International, and The Air Force Academy. 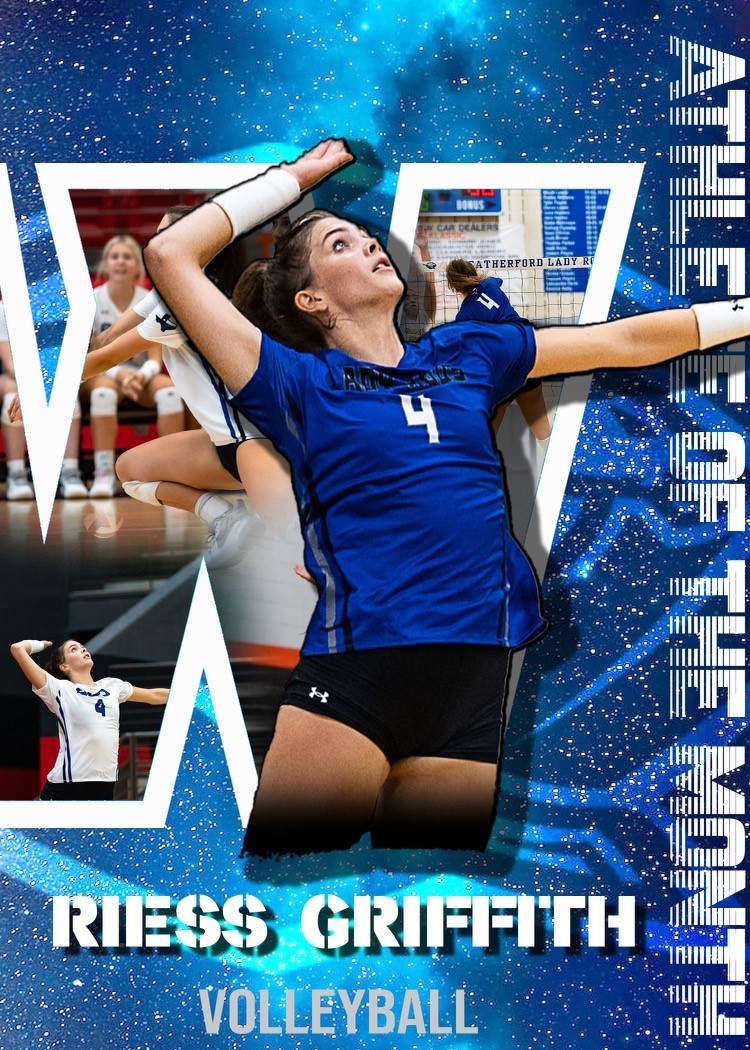 Senior Riess Griffith is a three-year starter on the Lady Roo Volleyball team.  As a junior she was named an All-District and All-State performer.  Last year she set the record for kills in a season and is leading the team again this year with 243 kills.  She is also second on the team in aces, passing, digs, and third on the team in blocks.  Riess has a 3.94 GPA and is ranked in the top ten percent of her class.  She plans to play volleyball next year at West Texas A&M. 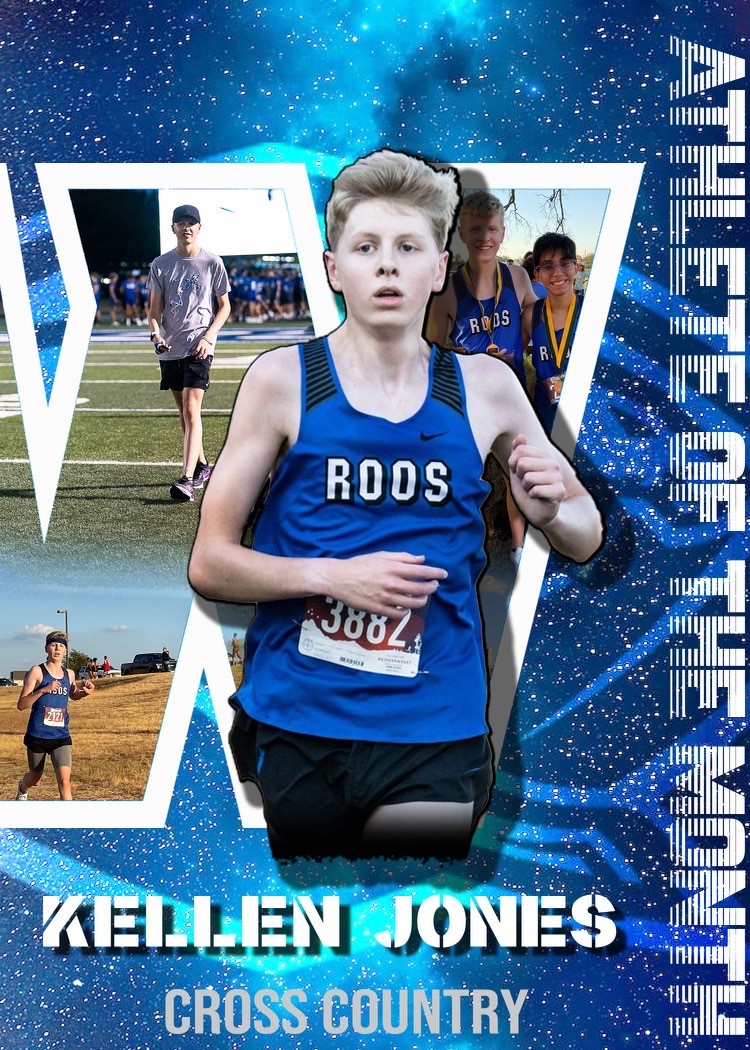 Senior Kellen Jones is a member of the Cross Country and Track teams at Weatherford High School.  Last year he was a member of the regional qualifying team and is in his third year of Varsity competition. He began the year medaling at the Haltom meet and winning the Crowley race leading into a new personal best time at the Southlake Invitational.  Kellen is a member of NHS, UIL Academics, and is the SNHS Vice President to go along with being ranked 1st in his class with a 4.46 GPA.  He has plans to attend Texas A&M after graduation.
PLATINUM PARTNERS